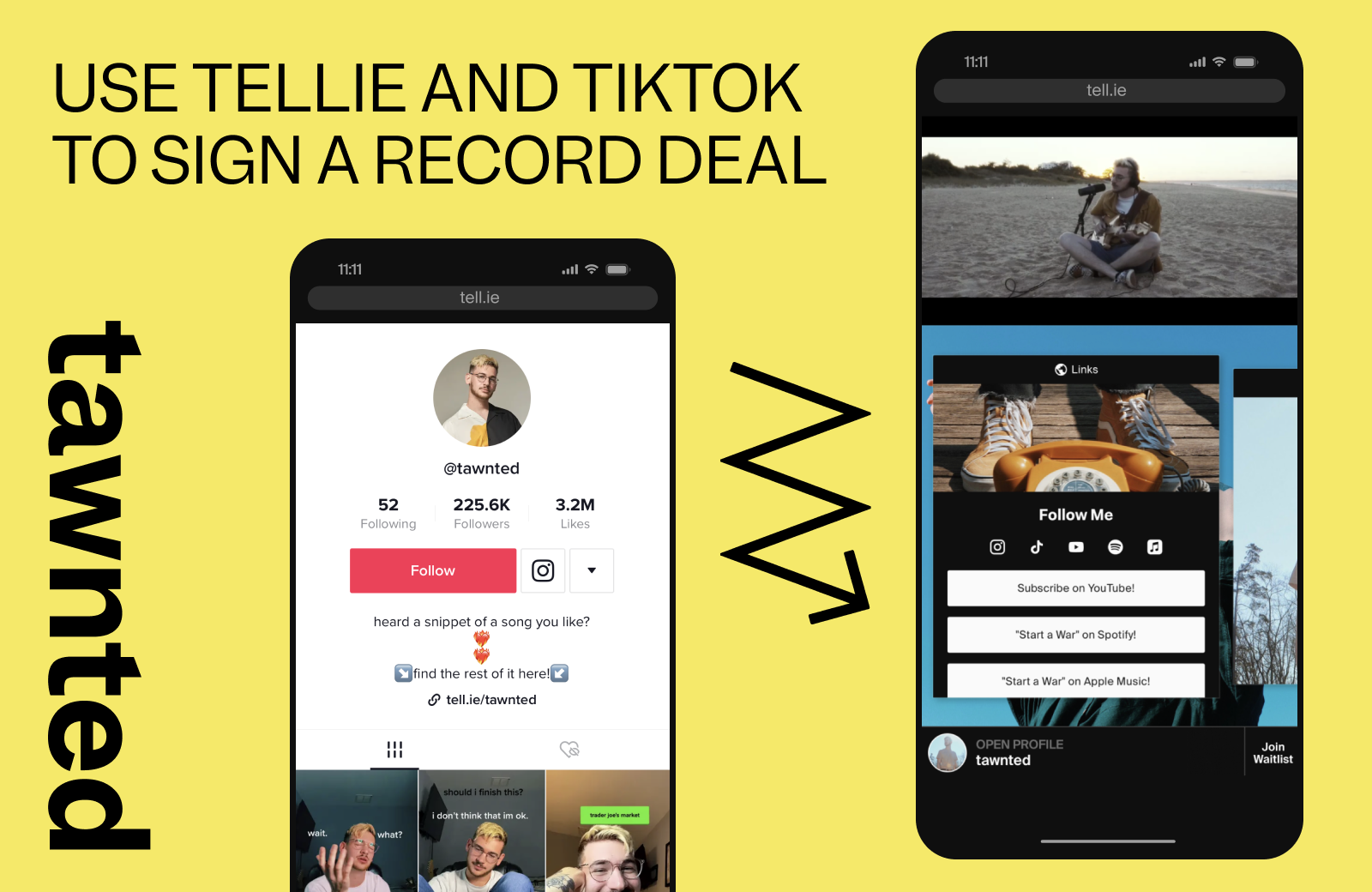 How To Get A Record Deal Using TikTok & Tellie

From e-commerce to entertainment, TikTok has reshaped how nearly every industry reaches customers. But no space has been more dramatically impacted by TikTok than the music industry. It’s given aspiring artists in nearly every genre the power to bypass traditional gatekeepers and catapult themselves to stardom by going directly to fans. On the business side, A&R departments now scour TikTok for the next big star to sign to their label and more than 75% of TikTok users say they discover new artists on the platform.

“The dream is that an artist is able to find their voice and find that first community on TikTok, and then they become famous enough where they are able to get a record deal or perhaps even a publishing deal off the back of that and go on to become a superstar musical artist and creator,” TikTok’s Global Head of Music, Ole Obermann, said to Music Business World in February.

Turn A Bump in the Algorithm into Long-Term Success

But how does an aspiring musician crack the code of turning views on TikTok into a career in music? The key is not just getting your sound out there, but getting your story out there. You need to turn casual TikTok users who discover your music into true fans of you as an artist. You want to avoid the quick “on to the next” swipe or the ensuing drop-off as a user is forced to navigate a sea of indistinct links to other platforms. It’s about giving the casual fan a true experience of you as a creator.

Picture this…your music is racking up millions of listens on TikTok or your track jumped on a viral trend. You’ve worked so hard for this moment, and it feels amazing! But a few days later you’ve got no real, tangible results to show for it. Ultimately, you need to convert those listeners into true fans and advocates. Or else you’re going to find yourself back on the grind, chasing views, hoping to get another pop from the algorithm. Hoping that next time you find some real fans who learn your name.

Build a Home for Your Creativity & Tell Your Story

At Tellie, we help you break this cycle by giving you a home for your creativity that you control. We give you the tools to introduce your music in a beautiful virtual venue that’s true to your brand. Passing TikTok users can engage with you and explore your content without ever leaving TikTok. Your future fans get to know you--your music, your motivation, your creativity, your style, and most importantly, your story. They get a window into your world. They build a connection with you. They come back to learn more. They follow you across all platforms. Again, all without ever leaving TikTok. The best part? You can build your own mini branded venues in less than five minutes. Seriously.

Take Tawnted. He was a talented but undiscovered musician, working at Trader Joe’s, releasing amazing song after amazing song and hustling for virality. He had a knack for creating trending TikToks, but just couldn’t quite make the leap and translate it into the career as a musician he had been working so hard for. In 2020 his goal was to make one of his songs go viral. Unfortunately, it didn’t happen.

But in 2021, everything changed. Within 6 weeks of having Tellie in his bio, Tawnted gained 130,000 new TikTok followers [430% growth] and 5,400 Spotify followers [100% growth]. This helped his monthly listens increase by 120% and led to 240k streams for his single ‘Start a War.’ Tawnted then fielded several major record deal offers and is on his way to becoming a household name.

So how did Tawnted do it? Simply put, he was prepared.

Simply put, he was prepared. When he hit the TikTok algorithm things took off because he had built a home for his creativity on Tellie that matched his incredible sound. He first teased his sound in TikToks and enticed users to want to learn more about him. He then used clever calls-to-action to send users into a branded, interactive Tellie Set featuring his music, images, GIFs, and more info about him via his link-in-bio. Tellie enabled him to create a full immersive experience in one place--all without leaving TikTok. Instead of sending his fans down a hallway of links like all of the other link-in-bio tools, he gave them access to a beautiful gallery to explore his work and get to know his story. No more meaningless clicks and no more sending his fans away from his work to drop off and never return. Once Tawnted cultivated TikTok users into true fans using Tellie, they clicked through at over 10x the average TikTok CTR to follow him on all channels and stream his music. They couldn’t get enough.

By using a Tellie Set as his link-in-bio, Tawnted stood out among the sea of other musicians releasing music on TikTok. The best part? Within 22 days of joining Tellie, Tawnted fielded several major record deal offers. For more check out tell.ie/Tawnted to follow along as Tawnted takes on the music industry, one TikTok at a time.

We are creators building for creators.

Ready to get started?